Prof. Dr. Neeraj Taneja is a graduate of KLE Dental College, Belgaum 1998. After completing his Post graduation in Oral Medicine & Radiology from SDM College of Dental Sciences, Dharwad,. He had been a Professor with 16 years of experience in Dental Colleges. His specialty areas include Clinical Research, Oral Medicine & Radiology, Orofacial Pain, Forensic Odontology, and Oral Cancer. He had been conducting various hands-on workshops on Bite-marks. Currently serving as Advisor to INPAFO. He is also Managing Editor of the Journal of Indian Academy of Oral Medicine and Radiology (Scopus Indexed).

“The criminal can lie through his Teeth though his teeth themselves cannot lie.”

1. On the Basis of Causation -

Bite marks can be differentiated on the basis of their agent causing the impression. Humans and Non-human – Animal bites like human bites are very common and show the spectrum of disparity on a large scale. It is equally crucial for the investigators to analyze the origin of the bite marks as animals are producing bites both in deceased and the living individual.  On the manner of causation which is further classified in Non-Criminal (Eg. Love Bites) & Criminal (Offensive & Defensive). The following figure 2 and 3 shows the categorization for the criminal causation of bite marks, both in the case of offensive and defensive bite marks. 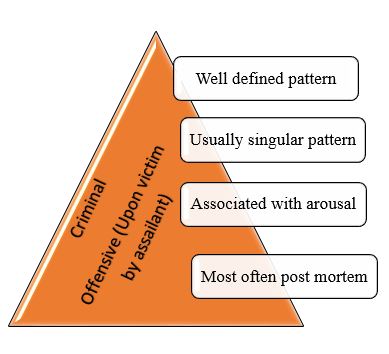 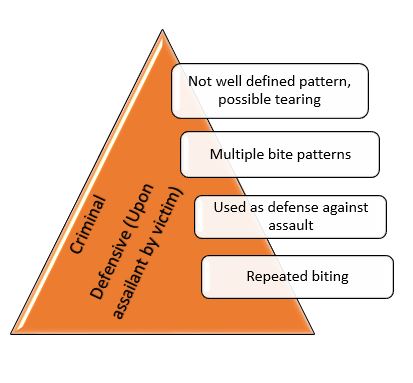 2. By Degree of Impressions-

On the Basis of Bite Mark Injury, the bite marks can be differentiated on the basis of the severity of the injury produced. 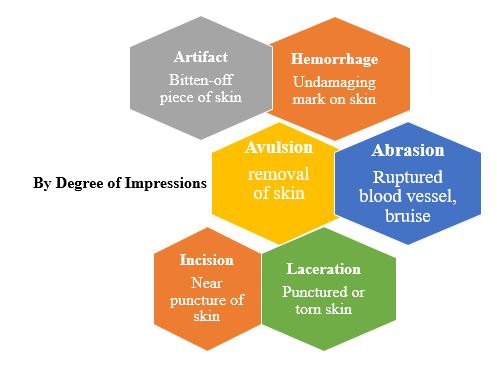 Figure 4 - Bite Marks on Basis of Degree of Impression

3. On the Basis of Intensity –

Bite marks can be differentiated on the basis of the intensity of the impression produced.

How do we Identify the Injury as a Bitemark?

Identified on the basis of gross features which consists of circular or elliptical marks which will represent the upper and lower arch also called as maxillary and mandibular arch. In the center part, ecchymosis will be seen due to sucking action. Then there are class features that consist of the shape of the individual tooth type. As incisors will leave rectangular marks (Table-1). More features like Tooth alignment or arch shape are also considered. To narrow down the search then individual features are noted such as fracture of the tooth, Rotations, spacing, or any other individual feature of specific dentition. 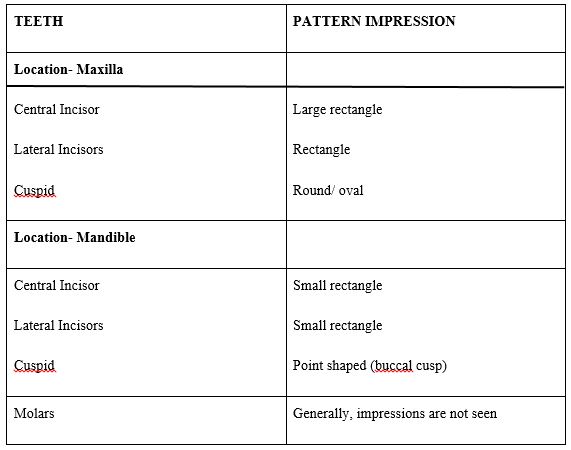 Different Sites on which Bitemark can be Encountered

Anatomical Location of Human Bite Marks – Human Bite impressions are found all over the body parts especially on breasts, nipples, thighs arms, and legs in the case of females during the course of sexual assault, rapes, and other sexual and physical abuse. These marks are also commonly seen on the arms, shoulders, and also on the groin or at genital areas of the males.

While the victim may receive bite marks on hands, forearms, and shoulders from the perpetrator in cases of self-defense. 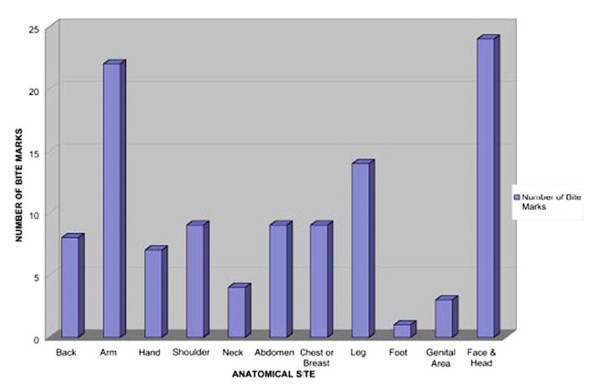 Factors that Affect the Bitemarks

Terminologies that assure unconditional identification of the offender, or with no uncertainty are not considered to be the concluding result. Any term that is used differently from other than the prescribed protocols should be mandatorily explained in the report’s body of the bite mark or in the legal testimonials. Familiarity with all the standards and the protocols of ABFO is the prime responsibility of all the boarded forensic odontologists.

At the point when suspects are recognized, dental evidence ought to be recuperated by a qualified Odontologist. The collection of evidence related to the bite impression is very important and significant to inspecting the wound or injury. Once an examiner has the chance to restore bite mark evidence and DNA evidence from salivation, time is of the quality. The individual who gathers this evidence ought to have the skill and have specific practice earlier for doing certain casework.

Collection of Evidence from Victim

For the proper examination of the injury, the collection of bite mark evidence is of vital importance. In a living victim, the bite mark healing process takes place and degradation occurs in the case of the deceased. Consequently, it is essential to evaluate and record the pattern of injury throughout the time. The recording of the following details should be done both in living or deceased victims like Demographics (name, age, sex, race, case number, etc.), Location of the bite marks (anatomical location, the contour of the surface, tissue characters, etc.), Shape of the bite marks (round, oval, crescent, irregular), Color and size of the mark (vertical, horizontal), Type of injury (petechial hemorrhage, contusion, abrasion, laceration, incision, etc.)

Saliva Swab of the Bite Sites

For the purpose of examination, the first and foremost step is saliva swabbing of the bite mark area. The swabbing of the suspect and victim is performed by the medical examiner or skilled forensic technicians/odontologists (if possible). As 80 percent of the population in the world are saliva secretors so the blood type can be easily identified from the examination of saliva samples which alone can help in the establishment of the assailant.

Photography can generally be said that it is the combination of technique and visual observation and is a light drawing technique by means of an instrument called a camera.

Photographic Documentation of the Bite Injury

Bite mark examination requires scaled photos (life-size) of the bite mark for the purpose of comparison with suspect biter dental casts. A bite mark standard reference scale, the ABFO no. 2 scale, is utilized to obtain these scaled photographs. The Odontologist holds the scale at the right angle nearby the bite mark; the plane of the bite mark must be parallel to the scale and the two planes must be coextensive. The police photographer holds the camera at a right angle (90 degrees) to the central point of the bite mark; this inclined angle obtains parallelism between the plane of film/ digital and the bite mark that reduces the distortion in the photographs. If the position of the body is known at the time of the biting process then the photography is performed with the same position in the case of living victims that again helps in reducing the distortion in posture.

For Bite Mark Photography, Different Types of Photographs are Needed

Preservation of any evidence is an essential and important step in crime scene processing which helps in the interpretation of crime in the investigation because if the evidence is not preserved properly it may get contaminated or destroyed that resulting in a false investigation. Bite mark evidence is completely different from other evidence like DNA evidence, fingerprint, etc.

Preservation of bites marks on various objects like skin, food, and non-food stuff is accomplished by photography. Storage of food material having bite marks can be done by keeping them in airtight bags and then freezing it in the refrigerator or by using preservative solutions.

The bite mark is preserved by photography in living victims. The impression and lifting of the bite pattern on a living person are considered pointless because, in the case of a living person, the examination is delayed.

According to the American Board of Forensic Odontology, there is a protocol to be followed for the removal of tissue and for preserving it. For the purpose of securing, a retaining device for example a piece of PVC pipe, plastic container’s top or customized dental plastic retaining ring formed by the forensic odontologist may be used. The ring size should be at least a centimeter away from the size of the original bite mark in all directions. The gluing of tissue starts, using cyanoacrylate glue i.e. Krazy glue, and sutured to the retaining device.  Tissue attached to the retaining ring is lifted and a cutting instrument scalpel is used to cut the underlying layer of fat from the skin epidermis and dermis. Precautions must be taken to not cut the skin at the time of tissue removal. 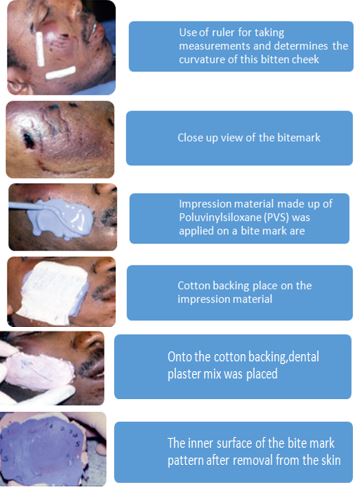 Analysis and Comparison of Bite Mark

The comparison of the dental evidence from the suspect and the bite mark present on the victim or on any object is the next step after the collection of the evidence by the Odontologist. The presence of any relationship between the dental exhibits is then observed.

After the completion of the bite mark analysis, the comparison process is initiated. Bite mark comparison comprises of comparing the bite mark of the suspected biter’s different dental features with the bite mark collected from the scene of the crime to establish the association between them. Comparison after analysis help examiners to form opinions. Comparison of bite marks can be done by two methods-odontometric triangle or objective method and superimposition also called a subjective method. In the optometric triangle method. By marking three points A, B, C a triangle is made on the tracing of the bite mark and teeth model. Points A and B are marked on the outermost convex point of the canine teeth while the C should be marked on the center of the upper two central incisors and then join all the points to make a triangle ABC. Then measured the length of the sides i.e. AB, BC, CA, and the angles a, b, c of the triangle. This should be done for both the jaws i.e. upper and lower.

Conclusion and Opinions in Report Making

Bite mark analysis in forensic sciences has played a vital role in the criminal justice system. Their significance value manifolds when this crucial piece of evidence is left on the object(s) at the crime scene. For example- Bite marks on cheese, apple, chewing gum, etc.

For a more detailed insight into the session, you can visit our YouTube Channel Forensic 365
Note- All the images used are for educational purposes only. For removal, Kindly Email us to sifsinstitute@gmail.com