Dr. Carlos A. Gutierrez, M.S.F.S., M.Ed. is a Ph.D. Candidate in the Institute of Legal Sciences of Nayarit State, Mexico. He got his M.Sc in Forensic Sciences, Chaminade University of Honolulu, USA, and his Master in Educational Management, Universidad Andres Bello, Chile. Also, he holds a Bachelor’s degree in Public Security Administration from the Escuela de Carabineros de Chile. Since 2016, he is the Science Director of True Forensic Science, and Since 2017, is a Faculty of Forensic Sciences at Chaminade University of Honolulu, USA. Previously he was a Teacher Assistant in the same program. He is a Mentor and Alumni in the Hogan Entrepreneurs Program. He is specialized in all subjects related to Crime Scene Investigation, Crime Scene Reconstruction, Bloodstain Pattern Analysis, Forensic Anthropology and Forensic Microanthropology, a new field in Forensic Sciences developed by him. His studies and experience as a retired Captain from the Chilean National Police Agency and former Forensic Laboratory Director make him ideally positioned to provide the student with the necessary theoretical and practical knowledge to be prepared to work in any forensic agency in the world. He is also a forensic consultant in different countries. He regularly participates in Forensic Conferences as a speaker not only in the U.S. but also in Latin America and Asia. He has been interviewed and guest in different TV, Radio shows, and newspapers in different countries in the world such us, LA Times, Crime and Forensics, Just Science (USA), Hola Chile, Excelsior News (Mexico), Legal Desire (India), among others.

The session has been started with shortly introducing our speaker for the session Dr. Carlos A. Gutierrez. his talk basically consist of the following key points which he has covered and detailed in his expert talk

Key points of the talk

Have you ever expressed in front of anyone that you want to be a crime scene investigator, if you have then definitely you must have received a response from people about mentioning the famous character of some television shows like CSI, Forensic Files, NCIS, CID, and so on. But as a forensic investigator, our role is much more crucial as it shows in TV shows. A crime scene investigator has to process the crime scene very accurately and interpretation of each and every piece of evidence should be done with zero error rate because in forensic there is no place for even a single mistake as it could lead to either wrongful conviction or a wrongful acquittal. So our role is much more focused and determined for only and only true justice.

Crime Scene Investigation works on a principle of Locard’s Exchange. Which helps the investigator to have a successful criminal investigation.

For investigation, the investigator has the basic knowledge of handling, identifying, and analyzing the evidence properly. There are certain steps that can help an investigator to perform his investigation on the right path.

Primarily, Crime Scene Processing is the basic step to investigate. From the moment the first police officer arrives at the crime scene, he follows a strict set of procedural guidelines designed to protect him and everyone else who’s present; guard evidence against damage, contamination, or loss; and document everything that occurs at the scene where he examined and evaluating the scene and then recovering physical evidences after documenting. By conducting systematic examination of these areas we can be able to uncover the facts like what it is? What function did it serve? Relationship to other items and scene? Timing and Sequence information?

When we talk about Crime Scene Investigation we should know what is the crime scene at first place so, as per the ISO 21043-2018, 3.29, The Scene is the place or object that is subject to and/ requires forensic examination (3.9) 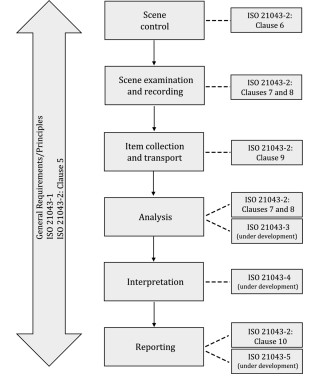 Crime Scene Investigation is complex, how Officers approach the crime scene of a burglary to that of homicide, Indoor, Outdoor and conveyance crime scenes, all have unique aspects to consider. Still, there are some steps of a crime scene investigation remains unchanged no matter where or how the crime has been occurred. Following are the 6 basic steps of crime scene investigation and these steps should be followed accordingly in a correct order which means you cannot start which step 3 and then follow the step 5 then 7 then 1 and so on in abrupt order. You must need to follow the order of Sequence of these 6 steps which are;

1. Assessing:  This is the first step of every crime scene after arrival of the Crime scene investigator. The first thing you have to do as a crime scene investigator is to determine the course of action to get yourself organized , coordinate with all the resources including the people and equipment and then you need to outline the duties with each team member.

2. Observing: after accessing the crime scene an investigator need to observe the whole crime scene with an initial walkthrough to have a general sense of the scene and prepare the reminder notes for further investigation.

3. Documenting: It is the most renowned fact about crime scene investigation that everything should be documented. And so here it is important to keep notes, photographs, videos, and sketches of every minute detail present on the crime scene so that no evidence is destroyed, contaminated, or replaced. Proper documentation of the crime scene can be helpful for reconstructing the crime scene at any time when so ever it is needed.

4. Searching: in this step, an investigator have to search every minute details which could be a piece of evidence left by the perpetrator. In this way, an investigator may use a specific search method such as zonal method, strip method, line search, the grid method, spiral method, wheel method, or any other as per the need at that particular situation.

5. Collecting: In this step, an investigator collects all the evidence accurately and preserves them with proper documentation and sends it to the forensic laboratory for further processing and analysis of evidence.

6. Processing /analyzing:  this step can be done in both places such as on the scene or in the laboratory as per the demand of the particular situation of the case. At the crime scene, this process is the last one because after that an investigator rarely comes back except in some cases where there is an urgent need for reconstruction and re-search for additional or missed evidence.

In the crime scene, there are a few things that are mandatory to be strictly followed to bring justice with truth and only with the truth. This means that we need to be always objective and be loyal to science not with the people as the forensics. Following are the few CSI mandate mentioned by the speaker in this session

Basically, evidence is anything that tends to prove or disprove a fact in contention of crime. There are two types of evidence which are:

Our speaker has great knowledge and experience in this regard that he can detail the thing whole day but due to the time-bound, he has tried to finish the things in a concise way.

All the evidence has a specific value under the court of law. But we have to keep in mind the context of evidence. These are:

So basically the importance of properly observing the evidence in context will provide you an additional approach for each item such as what is it? What function did it serve? What was its relationship to other items and the scene and also help to access the timing and sequence information?

There are certain types of new technologies introduced which gives a remarkable evolution in the investigation.

By following the methodology of crime scene investigation, it is possible to have a successful criminal investigation. And for the sake of justice, we have to keep in mind that we don’t have to be biased and we always beware of the pressure put on us for investigation and we didn’t have to act emotionally during the investigation. Because if we want to reveal Truth we have to be justified in all senses. For a crime scene investigator, identification and interpretation of the evidence are very crucial to solve a crime and for that, an investigator needs to have good knowledge, experience, and skill along with good practice and heedfulness with the new and updated technologies.

Note: All the images are used for educational purposes only.  For removal kindly Email us to sifsinstitute@gmail.com