Dr. Evi Untoro, a Forensic Pathologist, also learning in Forensic Anthropology, Forensic Genetics/ DNA, Forensic Radiology.  She is a member of INDONESIAN National DVI Team (since 2007), INDONESIAN BANTEN Province DVI Team (since 2016), The Advisory Team in Forensic Pathology, and Forensic Anthropology SubWorkingGroup in INTERPOL DVI Team (since 2017). Right now she has the position of the Vice President Indonesian Region on INPALMS (Indo Pacific Associations of Law, Medicine, and Science) since 2013, the Member of APMLA (Asia Pacific Medico-Legal Agency) since 2013, IALM (International Academy of Legal Medicine) since 2011, AFOHR (Association of Forensic Odontology for Human Rights) Board Member 2019.  She has 5 years of experience in the Identification of the Japanese Soldiers Human Remains of World War II victims of MIA (Missing in Action) in Papua and Makassar, Indonesia. She was involved in many Disasters in Indonesia and took joint training on DVI at several abroad countries using the DVI INTERPOL Guide as International Standards.

The third day of the lecture series on Forensic Odontology for PG students organized by the Department of Oral Medicine and Radiology, Theerthankar Mahaveer Dental College and Research Center with collaboration with SIFS India and AFOHR was started with a brief introduction about the esteemed speaker of the session, Dr. Evi Untoro. Then the session was headed by her imminence when she started with her diverse experiences in Disaster Victim Identification.

There is a certain categorization of disasters such as natural and manmade and most often we have heard about the Open disaster like a tsunami in which everybody becomes the victim and the closed disaster which is just like a fire in a room or a building. There are International Standard for the DVI team which must be followed by the whole team according to the INTERPOL Disaster Victim Identification Guide

Before going further let's know the basic phase of the Disaster Victim Identification. There are the following 4 phases of the DVI process which are performed effectively and efficiently depending on the circumstances of the incident.

So if we see the whole DVI process collectively, phase 1 and phase 2 is all about the victim data whereas in phase 3, we deals with the data of the missing person and in phase 4 we deal with the identification and release procedures for the case. There is two kinds of form in which the collected data is filled accordingly. The first one is the Yellow Form for the ante mortem data which is used in ante mortem office and the other one is a Pink form for post mortem data which is used in the mortuary.

There is a meeting for the INTERPOL DVI Team in every 3 to 5 years in which they discussed how it can be made easier for people to get expertise for DVI and also they used to update everything like data of DVI Quick Scanning of the injured during the tenure. There is also a form for collecting required data from the ante-mortem and post-mortem for a quick scan of the scene. 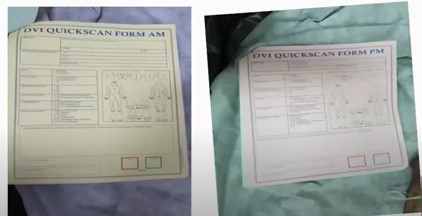 There is also an updating guide in form of a yellow and green form for post-mortem and ante mortem records which has been updated every year and revised every 5 years accordingly. In the yellow form, all the human remains found on the scene is mentioned and in green form, the property recovered is recorded which includes both human and non-human things. The DVI team include an expert from various field such as Forensic Entomology, Forensic Anthropology, Forensic Odontology, Forensic Radiology, as well as a group of an expert from the forensic science, Fingerprint section, Photography section, and DNA and Toxicology units for the proper crime scene investigation, photographing and evidence collection.

Dr. EVI then explained two cases, one from the Earthquake-Tsunami-Liquefaction of the Palu-Donggala, Central Sulawesi in which 2081 dead victims were identified. 723 victims using Management of the Dead Bodies After Disaster: a Field Manual for First Responders (ICRC-WHO-PAHO-IFRC) by taking only photographs. And the victims were also identified by family or friends and buried in the family or Public cemetery. The rest of the victims were buried in mass graves with government permission. From the Data of the Indonesian National Board on Disaster and Countermeasure (BNPB), there are still 1399 missing persons. 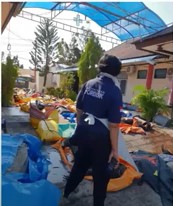 The other case discussed by her was Lian Air PK-LQP JT610 which was crushed into the Java Sea in the early morning on 29 October 2018. From 189 passengers and crews, only 125 victims were identified by using INTERPOL DVI Guide mostly identified by DNA. There are still 64 missing persons from the manifest. Updating after 1-2 weeks, divers found body parts, and another 2 persons were identified.

Then she discussed about the Disaster Victim Identification of the huge eruption and partial collapse of the Anan Krakatau Volcano in the Sunda Strait and several regions of Banten in Java and Lampung in Sumatra, Indonesia.

After the detailed and very impressive discussion about the whole procedure of DVI Dr. Evi has concluded about the procedure which should be followed in Mortuary

By concluding the session she has advised that Mass Disaster Management are essential for the identification of the Causalities and Dead bodies of the victims. The quick Decision on the handling of the DVI Operations Team is needed on the field, which are mentioned in the international manual such as Management of the Dead Bodies After Disaster: a Field Manual for First Responders (ICRC-WHO-PAHO-IFRC) and INTERPOL DVI Guide which are already published and used for training for the DVI personals.

The session was full of information about the disaster victim identification and the International Standard which should be followed DURING the DVI. Dr. Evi has detailed everything in such an expressive manner that anyone could relate and understand very easily. For more detailed information about the session, I would suggest to please go through once with the session recording from the YouTube Channel forensic365

Note: All the images used are for educational purposes only. For removal kindly email us to sifsinstitute@gmail.com