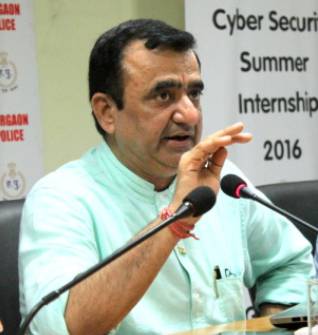 Mr. Rakshit Tandon, Cyber Security Evangelist has experience of more than a decade in the Security Domain. He is the Founder & Director of Hackdev Technology Pvt Ltd. He is a Cyber Security Consultant to the Internet and Mobile Association of India. Marked as Resource Person/Visiting Faculty for Cyber Crime Investigations at BPRD for Training Law Enforcement Officers across the Country. He is the Chairman of India against Child Abuse, A National Outreach Program by Justice Mohan Children University and NCSSS. He in his personal capacity has sensitized more than 4.1 million students on the issue of Cyber Safety across the nation covering more than 25 states, 4 union territories. He has played an important role in contributing to Child Online Protection in India Report by UNICEF. Speaker at “Talks at Google” , “TEDx Talks “ has been Non-European Expert at European Commission on Safer Internet in 2010. Awarded with Karamveer Jyoti Puruskar 2019, Gurugram Achievers Award 2019, SKOTCH GOLD Governance Award to Gurugram Police for Cyber Security Summer Internship 2019 and also Awarded with Karamveer Chakra by Rex Conclave 2015 and 2016 with Gold Karamveer Chakra. Also awarded the Cyber Guru of the Year Award in 2015 by the Government of Maharashtra and Global Cyber Crime Helpline Award in December 2018. He has been invited nationally and International Conference on Cyber Security as Key Note Speaker and Panelist. As an Expert in Cyber Crime Investigations/Forensics and Digital Footprinting working as Faculty to Major Police Academies across the country like CBI academy, NIA, NEPA( North Eastern Police Academy) etc. Consultant to UNODC ( United Nations Office of Drug and Crime) to train 6 Nations on Cyber-Enabled Trafficking in Persons. Felicitated by Various Brigades of Indian Army and Airforce for conducting Sessions on Cyber Security at Western Command, Eastern Command and Airforce Stations.